Why foreigners believe that Kazakhstan is a safe country to travel, work and live

Why foreigners believe that Kazakhstan is a safe country to travel, work and live 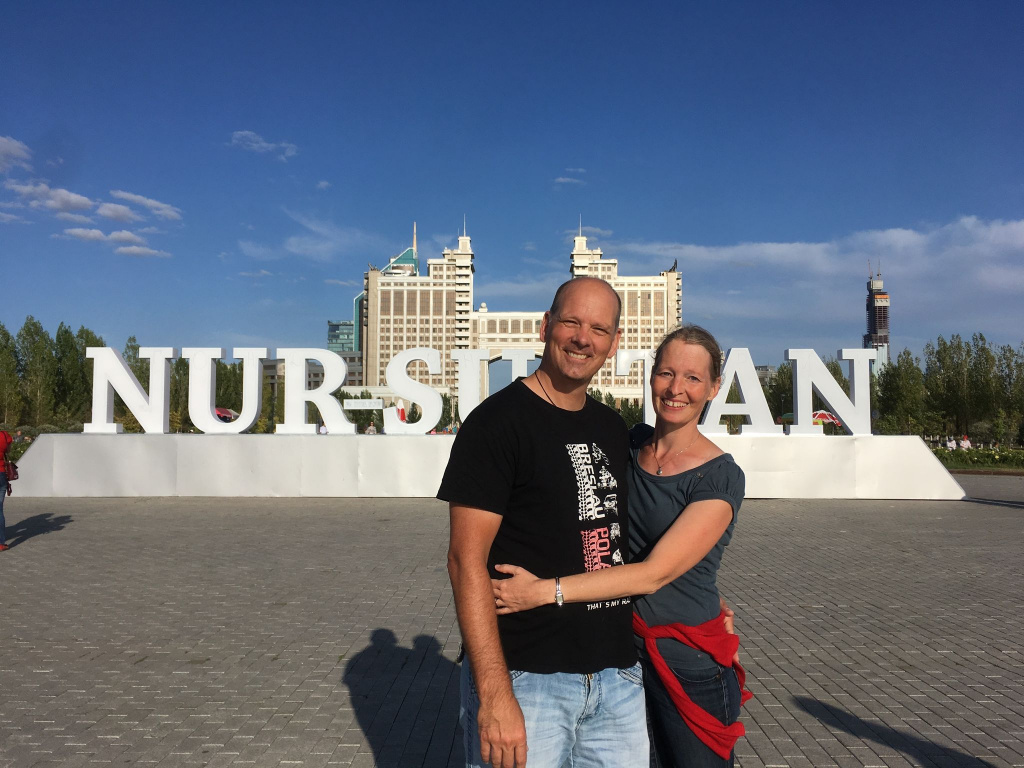 My wife and I are from Germany and we started traveling the world in February 2018. Since then our journey took us through Caucasus Region into Iran. Last year we had the sensational opportunity of traveling seven weeks through China. Starting from the west, coming from Kyrgyzstan we drove with our little yellow van through Tibet to Hongkong and via Peking to Mongolia. We spent the entire winter in Mongolia and Siberia before traveling to Kazakhstan.

As many people ask for our finances, we can assure you that we are not millionaires. Of course, such a journey is planned ahead as well as we saved money. We sold everything we had in Germany and moved into our van. Living on the road and in our van does not cost a fortune. Our travel speed is slow, we do not need hotels and we are cooking by ourselves as anybody is doing at home. Of course, once in a while we are also going to a restaurant.

We really did not decide to move to Kazakhstan. It was out of the necessary, that we spent more time in Almaty. Our van was in need of some repairs. It is 23 years old, so we decided to get the body work and a new color done here. When you have traveled that far with your van and spent so much time in it, you start having a personal relation to it. Unfortunately, at the beginning of 2020 the visa regime changed and we had to leave the country before the van was ready. We decided Uzbekistan would be nice for a visa run, before we start traveling through Kazakhstan. But then borders closed and it took us until November 2020 to be able to come back to Almaty. Back to our van and back to all our belongings.

It is a big country, and the roads have potholes, but the wide landscape is impressive and beautiful. Especially in winter it is “wonderland”. The cold in this part of the world is totally different to the cold you experience in central Europe. The temperature is lower, but it does not feel like it, because the air is so dry.

There are no real difficulties when traveling in Kazakhstan, compared to other countries. There is the language barrier, which makes things a little more difficult, but with google translate there is always a way to communicate and a good laugh sometimes, because of funny translations. But in general, it works well. The big problem was the suddenly arising of Covid-19. Our German embassy wrote a verbal note to Kazakh foreign ministry to inform the government of our situation, but all countries went into lockdown and we were stuck with two small backpacks in Tashkent, separate from everything we own. All our belonging were in Almaty. Now we were lucky to get a tourist visa and could return to Almaty to sort out paperwork with customs. 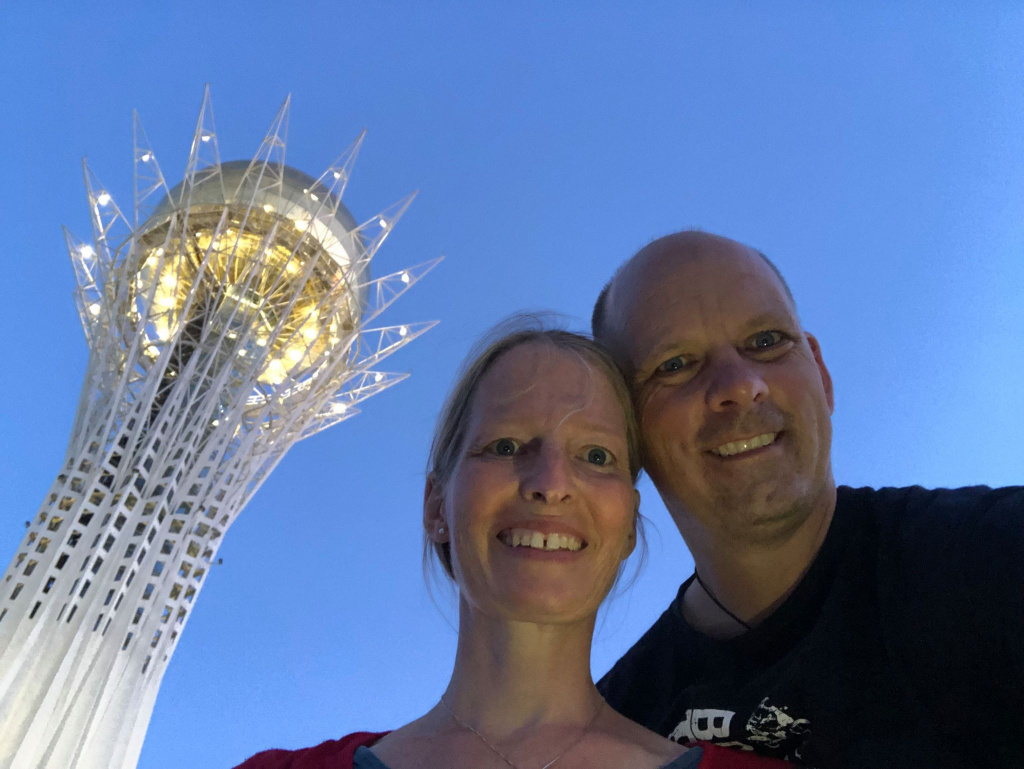 Compared to Europe Kazakhstan has so much space. The weather between the seasons is more extreme with hot deserts in the summer and ice cold winters in the mountains. This has an effect on the people in Kazakhstan and they are more cautious when it comes down to the elements of nature. A trip in a car from Almaty to Nur-Sultan can be an adventure and challenging, depending on the weather. A comparable trip from Berlin to Paris or further to Barcelona is easy. You do not need to worry about nothing there. In Kazakhstan it is different. Fortunately, we never had any technical issues with our car. It is “made in Germany”: Volkswagen.

The lifestyle does not differ a lot to the lifestyle we are used to from our country. People going to work or University, having fun and like to travel. The traditional food is very different and people are more proud of their traditions, I think. But overall, it is very similar to central Europe.

What we liked there

There are big cities, but in general the country is noticeably big and diverse. From the Mountains in the east, where you can go skiing, to the deserts and camels in the west, it is fantastic and impressive. In Europe, we do not have the vastness, the emptiness, the pure nature. Europe is so small. You have those traditional Yurts in the countryside and the tradition of nomadism, which is very special and gives you a different perspective on life and what it is all about. One does not need a lot to be happy. Your infrastructure, internet, mobile network, digitalization are in many parts better than in Germany. 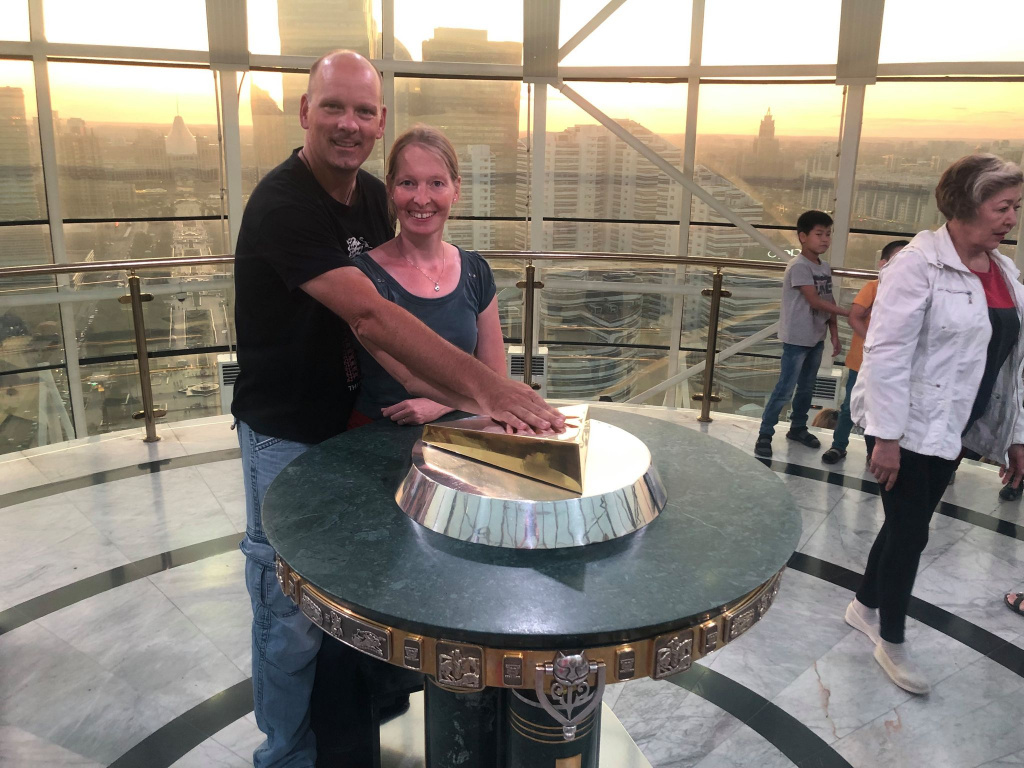 One day in January we were driving from Nur-Sultan to Almaty in our van. The road was under construction and very muddy. The trucks stirred the mud very liquid and when driving through it, the liquid mud splashed onto our van. Because it was so cold, it froze immediately to an interesting structure. When we arrived in Almaty it was very hard to open the doors because the whole vehicle was covered in a thick layer of frozen mud. That was very funny. 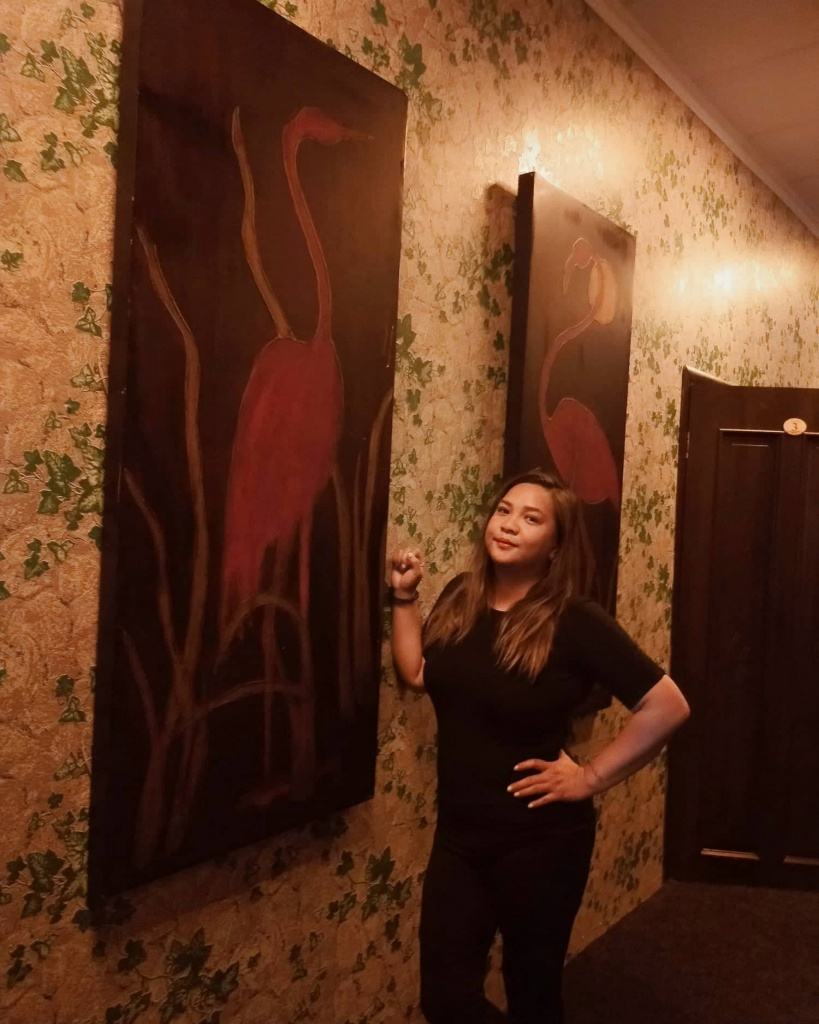 I am living and working in Nur-Sultan. I am the eldest in a family of seven children, so I have been always the breadwinner for my siblings. I studied Information technology at the University and worked for different manufacturing companies in Philippines, Taiwan and Hongkong. I discovered my passion and skill in Massage Therapy in the year 2010 and since then I continued to develop my talent and did not stop learning about the industry by undergoing different trainings. I was even able to put up my own home spa business in Manila.

I worked in a beauty salon in Nur-Sultan for six years and currently working for the Austrian Embassy. I came to Nur-Sultan, exactly seven years ago. I was working in Hongkong, when my best friend asked me to join her to work as a Massage Therapist in a Beauty Salon that was just newly opened at the business center of Astana. Without a single doubt and reservation, just a word from my friend that Kazakhstan is a beautiful country and that the company will take care of us. I instantly resigned from my job went back to Phils and waited for my ticket to fly to Astana.

First Impression was Kazakhstan is totally the opposite of what i have imagine. Infrastructures were modernized. Nur-Sultan to be specific is the safest city I have ever been; I never experienced or heard any crimes. It is so peaceful that people can stay or walk on the streets in past midnight which I cannot normally do back home. I am very impressed how placid and safe this city is. A city of great opportunities. I personally witnessed how fast has developed new buildings, business establishments have sprouted remarkably. It is a sign that this country is truly continuing to address the need to become more progressive.

Working abroad is not as easy as I thought. I always meet people of different nationalities. Hence, every foreign language is the biggest struggle, however, I was able to survive my seven years thanking google translate and hand gestures. At first the cold weather gave me as well the discomfort and can’t go outdoors without wearing layers of thick clothes. 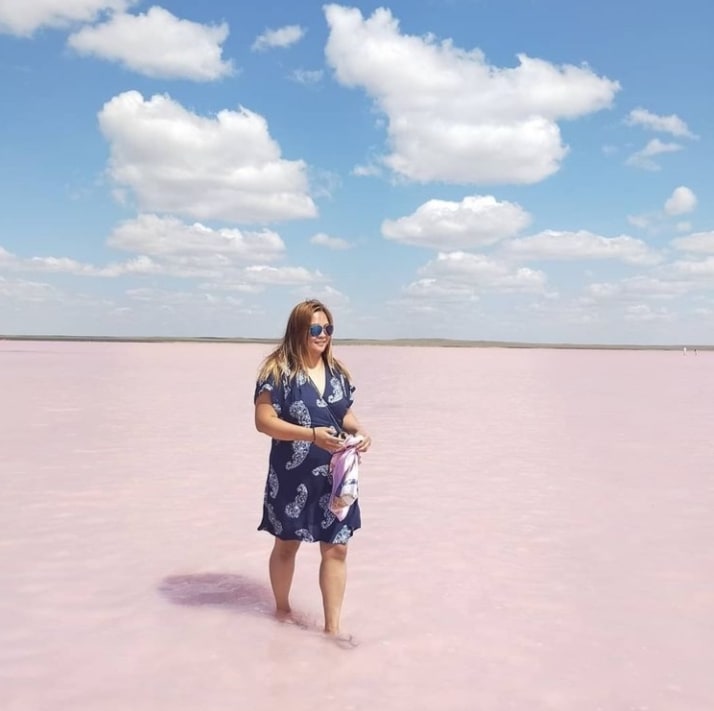 Infrastructures are astonishing, I am captivated of how the building structures comes in different shapes, Bayterek towers the pyramids and stadiums. It is like a symbol of history and the future.

Close family ties is being observed as one of the best Filipino culture, we invite all our relatives on every occasion. We never neglect each other during difficult times. We always try to help and being very hospitable. And these are few of the many similarities of our culture and of Kazakhstan.

Kazakh people are very welcoming to foreigners. It is flattering that every time I ride a taxi and learned that i am a Filipino they will instantly talk about Manny Pacquiao, which shows their love for boxing too. We do have this what we called “Filipino time” where we actually do not care about being “on time” and it really surprised me that Kazakh people practice this kind of habit. I also observed how some Kazakhs do not care about integrity or respect for word of honor which is I had a bad encounter a few times. 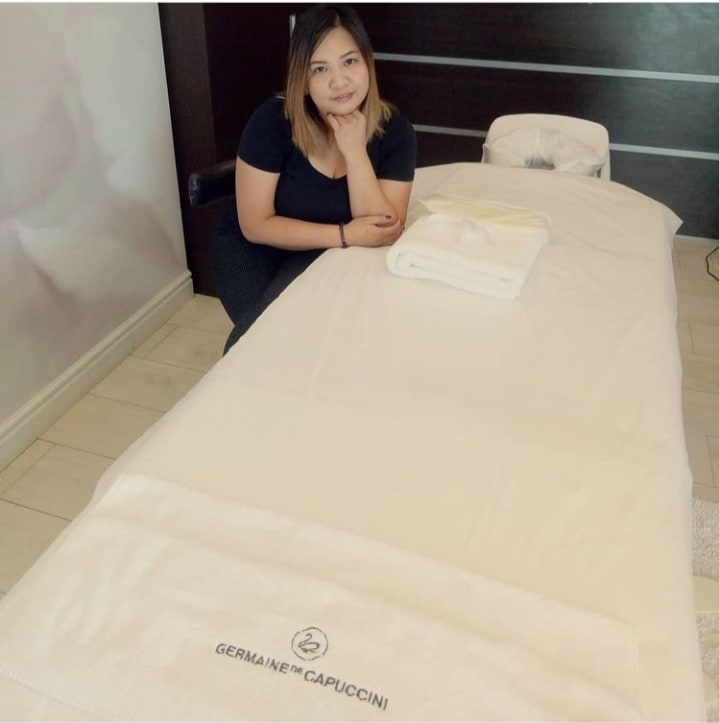 It is here that I first experience snow and I love it actually. Second is peaceful and safe streets. I came from a country that loud, busy streets and heavy traffics are pretty norms. And with a usual fear for your life or someone might grab your wallet or jewelry. Never experienced it here so far.

I have a lot of experiences that sometimes drive me nuts, especially with the nature of my work. But two events that leaves mark on my memory, the EXPO — 2017 where in I was able to go and watch live concerts of well-known performers. Another one was World FIBA KZ VS Phils. I witnessed how excited the Filipino Community cheered for the team Phils.

I am a Native English teacher here. I teach here at Eton house International school in Aktau. I came here in 2018, because my husband works here. He is Indian but he is also a resident of Kazakhstan.

My first impressions are snow, low temperature and new language. I flew from 25 degree and landed in -4. My goodness it was my first lifetime experience. I saw snow in real and was amazed how people were casually walking in snow.

The big difficult was the language problem as everything is in Russian or Kazakh. Sometimes Google also cannot translate properly in Russian language. It was hard to communicate while booking taxi or doing shopping.

Kids love to play here in snow even though the temperature is in minus it does not matter. I was like wow. And also I noticed that people speak so silently that sometimes I wonder I am speaking so loud.

I noticed many similarities. I feel sometimes I am in my own country. Half of the culture is same as India. In fact many Kazakh and Indian words are similar for e.g. sabun, dukan, janwar and many more.

People are open and welcoming for expats. They are ready to participate in new culture activities. Most important which I saw was love towards their nation. They are also good in hospitality.

Kazakhstan is beautiful country and blessed with snow, mountains and beaches. Also it has many natural resources. Comparison can’t be done with two beautiful countries. Every country has its own identity, unique beauty and beautiful nature. Many things I liked here that people do not get angry easily and they are soft spoken.

I used to get surprise initially whenever I was going for shopping after end of the shopping they used to say 'dosvidaniya' and because of new language I used to think I left something or they want me to buy something more. Little bit funny for me later I realized it means ‘goodbye’.

As a teacher I worked in three cities Oskemen, Nur-sultan and Aktau. When I was working in Oskemen one of the Kazakh government school invited me as Chief Guest. I found most of the people love Bollywood songs and dance. In fact many parents and students ask me to teach them Bollywood dance.

Read this article
A Frenchman about Kazakh friends and why foreigners should not be afraid of life in K...

413
American volunteers tell about experience of living in Mongolia