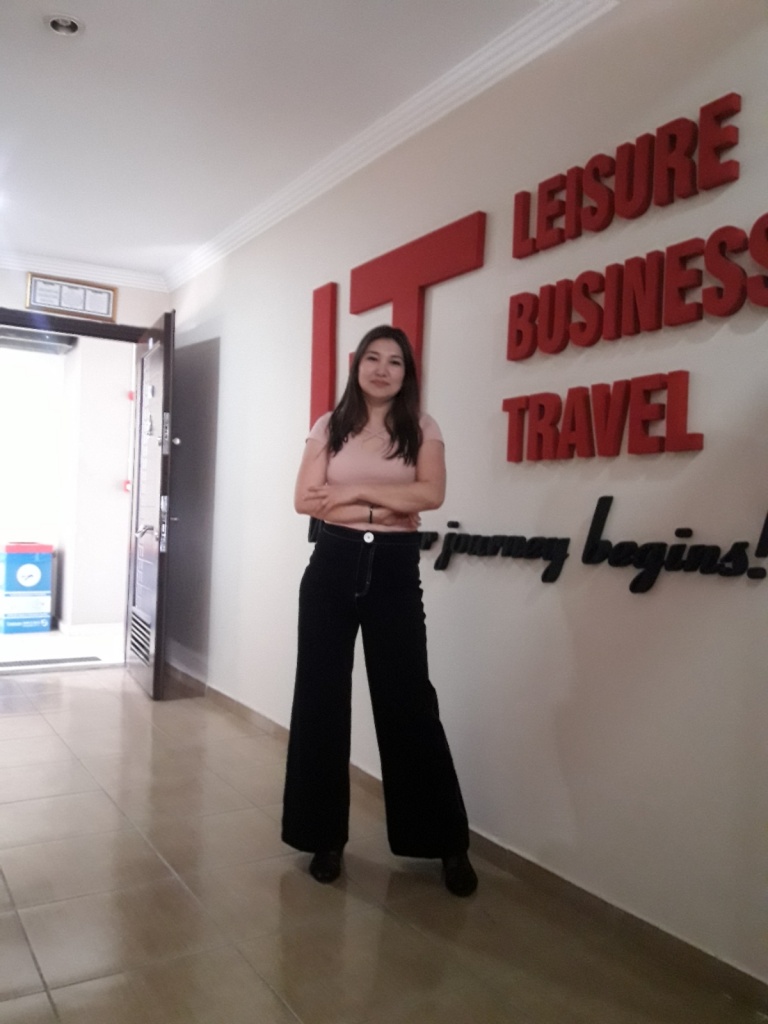 My future husband studied at the Zhurgenov Kazakh National Academy of Arts. He often went to a restaurant where I worked as a waitress as a student. That's where we met.

He proposed unexpectedly for me at my job. At that time we were 19 years old, and everything happened quickly and romantically.

At first, my parents were against our relationship, and they didn't want to let me go far. Turkey is a country that adheres to the strict canons of Islam. However, when the parents of my future husband came to woo, all fears were disappeared.

My husband's father is a Professor at Istanbul University, and mother is a mathematics teacher at school, both very cultured people. They were ready to get acquainted with Kazakh traditions, as in 2003 one of the Turkish ministries appointed my husband's father attache to the Embassy of Culture and Tourism in Kazakhstan. Everything went smoothly and calmly.

For family reasons, the parents did not arrange a huge celebration. The ceremony was held in a narrow family circle. At first, my future husband with parents visited our home. My family and friends warmly welcomed them. Later began the feast, which lasted about seven hours. They were delighted with the Kazakh dastarkhan. I wore gold earrings, and my mother had a gold bracelet, sisters and brothers had gifts from Turkey. 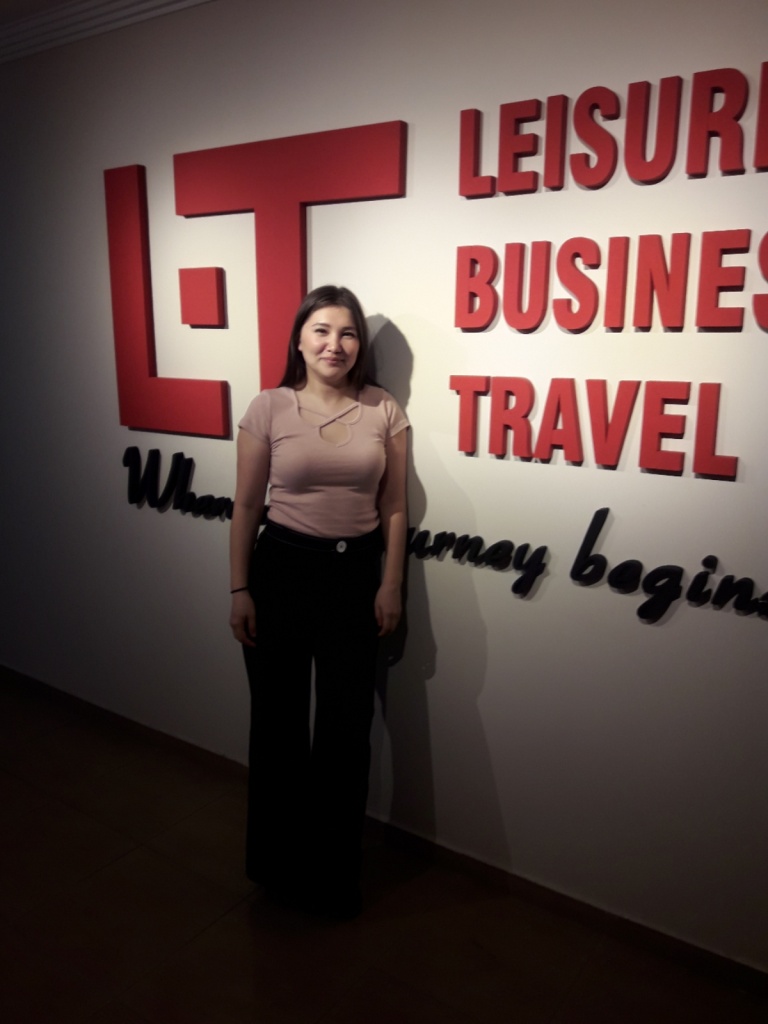 Kazakh weddings usually held huge celebrations, rich table, toastmaster, dancers, showmen. In Turkey, many weddings only serve cakes with drinks. There is no toastmaster just a DJ responsible for the music.

In invitation cards often tell whether there will be dinner or not. Depending on this, guests present gifts, often money or gold.

Turkish wedding is a little more expensive than ours, as the price for the restaurant, cars and other things is much higher than in Kazakhstan.

One of the distinguishing features of a Turkish wedding is «kyna gecesi» for females only. Also unusual that the bride's hands are painted with henna. Everyone sing songs and dance traditional Turkish dances, tables served with sweets and soft drinks.

On the day of marriage registration, I wore a simple wedding dress, we went to the registry office and held a wedding ceremony in the circle of closed ones. In the evening, we went to the restaurant, where spent a magical and relaxing evening.

We plan to buy a house on the Aegean coast, where we plan to relax with family and friends. 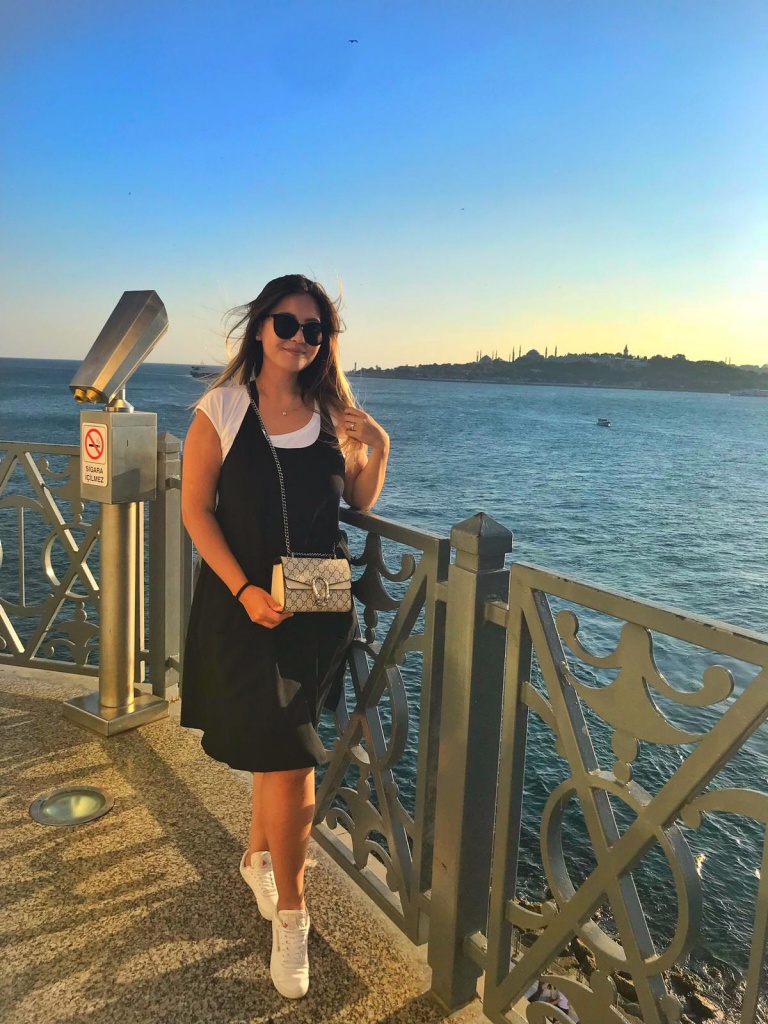 My husband and I met in 2016 thanks to our friends. We were added to group chat and chatted there.

Everything happened quickly, after two months of communication, and he flew to Kazakhstan for one day to meet me. A month later he introduced me to his parents in Istanbul. I immediately found a common language with them, and we fell in love. After the New Year, he met my parents. At first, my parents were prejudiced, they were against the fact that I'm not marrying a Kazakh. But after personal meeting doubts are gone.

He made a proposal in Turkey. Near the Istanbul district of Şile, is a resort location with beautiful views. During dinner at the restaurant, the host of the evening invited me to the stage and the future husband proposed to me.

In September, my husband with parents came to ask my family for their hands and hearts. They met them with dancing and beshbarmak. In Turkey, do not eat horse meat, so they ate it for the first time. My husband was delighted with the food, and kazy became his favourite delicacy. 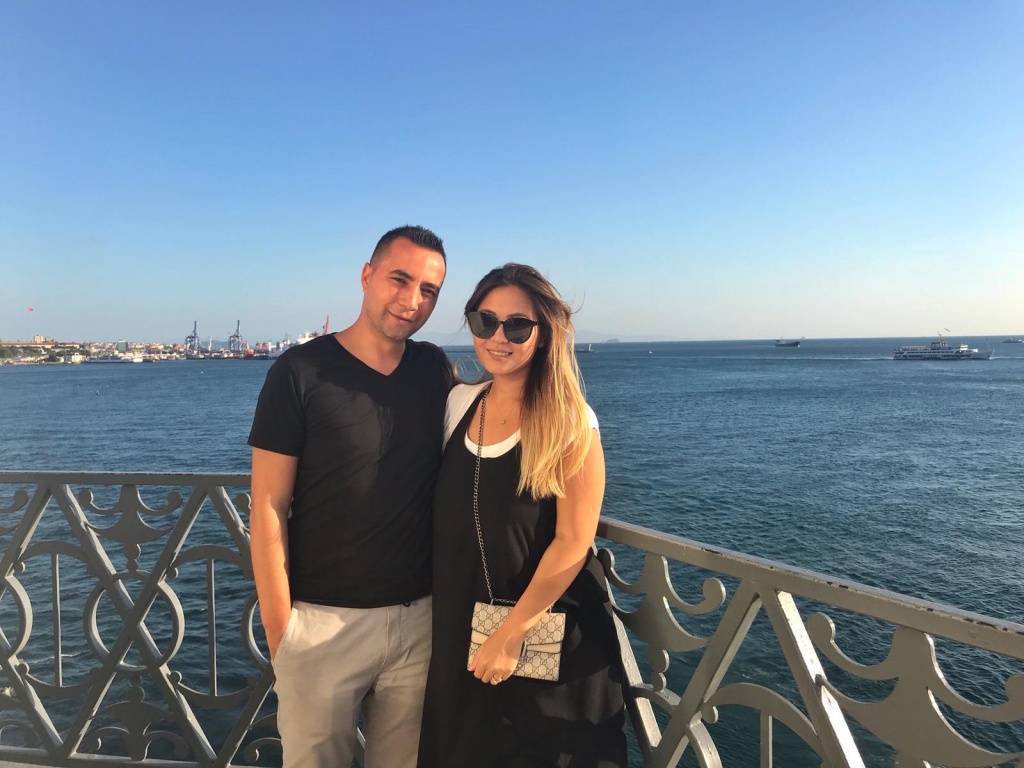 We held a ceremony sirha saly, which the Turks call «kyz usteme». We tried to combine the traditions together, so there were earrings and flowers with sweets. After, we started wedding preparations.

The most beautiful and unusual wedding ceremony in Turkey is the henna night. It is considered an important chain in the national wedding ceremonies and traditions. This event takes place in the house where the young bride will live after the upcoming wedding. But now many people celebrate in restaurants.

The bride dressed up in a special dress called «bindally». It should be a luxurious and expensive dress with traditional. handmade embroidery. As a rule, «bindally» as a family heirloom remains in the family for many years. The bride's face covered with a red veil with sequins and gold sequins or embroidery. The henna for a ceremony is brought to the home by the relatives of the groom on a silver tray. Trays with fruits, nuts and other sweets. It offers oriental pastries and marzipans. Then begin songs and lamentations. Words and chants so sad and the bride begins to cry. The bride's tears should bring her happiness, luck and joy in marriage.

When the bride cried enough, she sits on a sofa, and the mother-in-law pours out a spoon of henna in one of her hands and puts a gold coin in another. Gold coins symbolize luck, abundance and wealth. Therefore, a gift for the Turkish wedding is already known. The main rule to know is to present to the newlyweds either gold or money.

Our wedding took place on the ship in Istanbul. We wanted something beautiful and original. 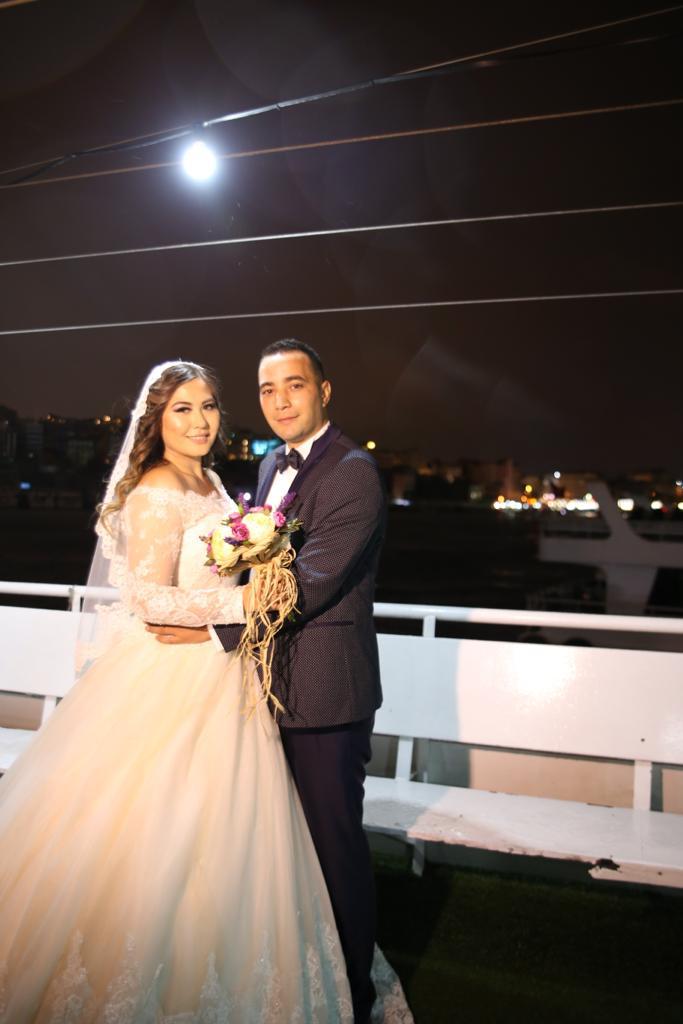 The evening was fun, we had Turkish halal dancing and Kazakh kara zhorga, Turkish songs and the permanent repertoire of Kairat Nurtas. Our wedding was with food, but in Turkey, it is not accepted to cook a lot of treats and dishes. Traditionally, the tables served with cakes, light snacks and soft drinks. Guests come to the celebration, not for the sake of food, but for the sake of good mood, to dance and communicate.

In February of this year was born our son Ediz. My husband supports me, teaches Kazakh and tries to make my family happy. So I want to be a great mom and a loving wife for my husband. 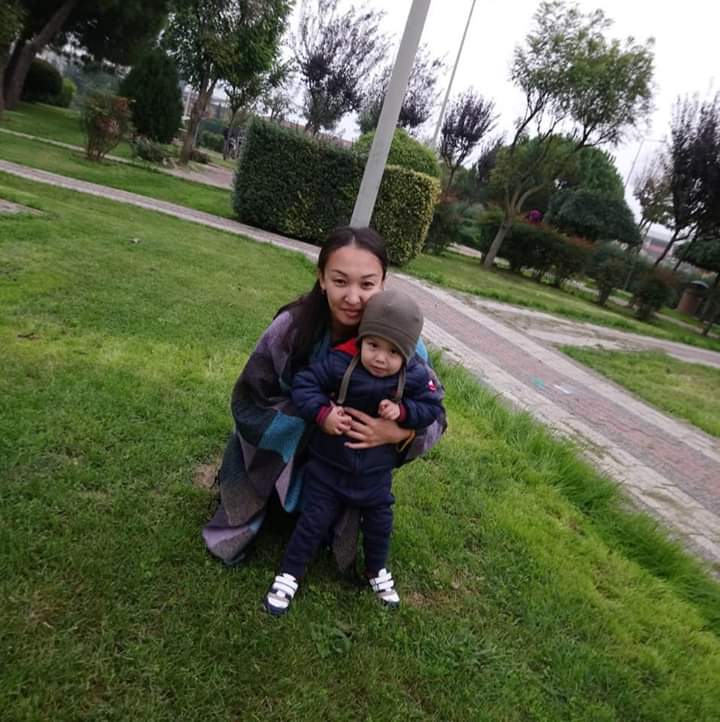 My husband and I met in 2008 in Almaty. At that time I worked in a Turkish company, and he came from Turkey for the position of the financier. We worked together for three years after our paths parted, I moved to Astana.

In 2015, he invited me for a vacation in Turkey, and I flew to Istanbul. We went to the resort where he proposed. We went to his parents, and they live in Manisa. The acquaintance went well, although it was all unexpected.

After returning to Astana, we started preparation for the kyz uzatu which held in 2016. Unfortunately, my husband came alone, as his parents aged, and we did not risk their health. 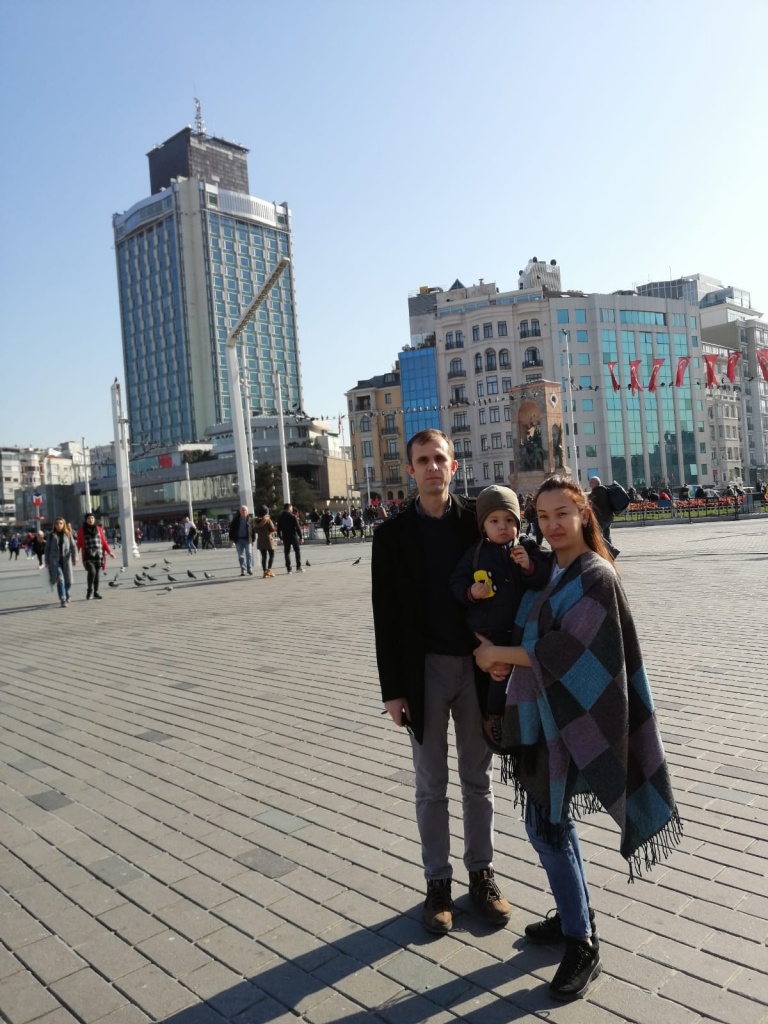 When the bride is taken from her parents' home, her father or older brother ties the bride's belt with a red ribbon, covers her head with an openwork red scarf and takes her out of the house.

Also, when we arrived at my husband's house, my mother-in-law gave me a clay pot decorated with ribbons, filled with sweets, wheat and coins. I had to break it in order to have a happy family life.

The wedding took place on February 14, 2016. The celebration took place in the wedding salon without the main meal, only cakes, snacks and drinks. This is how the usual Turkish wedding takes place.

The celebration took place in the wedding salon without the main meal, only cakes, snacks and drinks

Raise our son and be a loving wife.

Read this article
Tatar and Bashkir traditions you didn't know about

3037
UN volunteers on why they moved from China, Ukraine and South Korea and help Kazakhst...

1480
CONCIERGE SERVICES IN ASTANA THAT CAN MAKE LIFE EASIER