Since childhood, I was in love with horses. My first horse at three years was a dog. And at ten on New year, mom made me a gift and took me to the stables. Classes in the stable were closed, as was the occasion, and I was upset. But after the New year, I started attending classes. Of course, I was not immediately put on the horse. All children were first taught the theory, then we gradually tried to approach the horses, feed, care and clean them. So year after year, I realized that I really like it, and I continued to engage in equestrian sports. 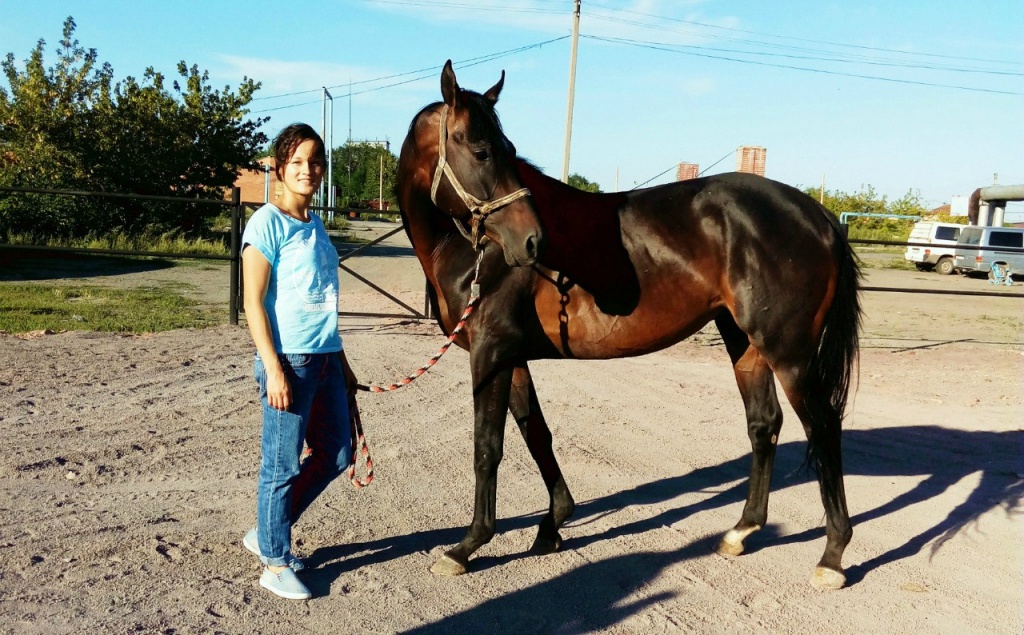 The first horse is the one you galloped on the first time. I remember how much afraid I was, but the horse just moved into a gallop. After it, I wasn't afraid anymore.

I taught horses as a child, and if you compare how it was in childhood and now, in childhood, it was much easier. I was a little girl who taught foals, which are one year old.

Seven years passed away, and I was still in the sport. There were a few times when I thought I had to leave and do something serious. It was during matriculation to a college, when I was a teenager. I kept coming back to this sport, it was hard to give up. Because horses — it's mine.

When I graduated from high school, I had a choice: to connect life with sports or go as artists-designer. I was good at both. But in College, when it came time to decide, I chose the design. But in University I entered the specialty livestock engineer. 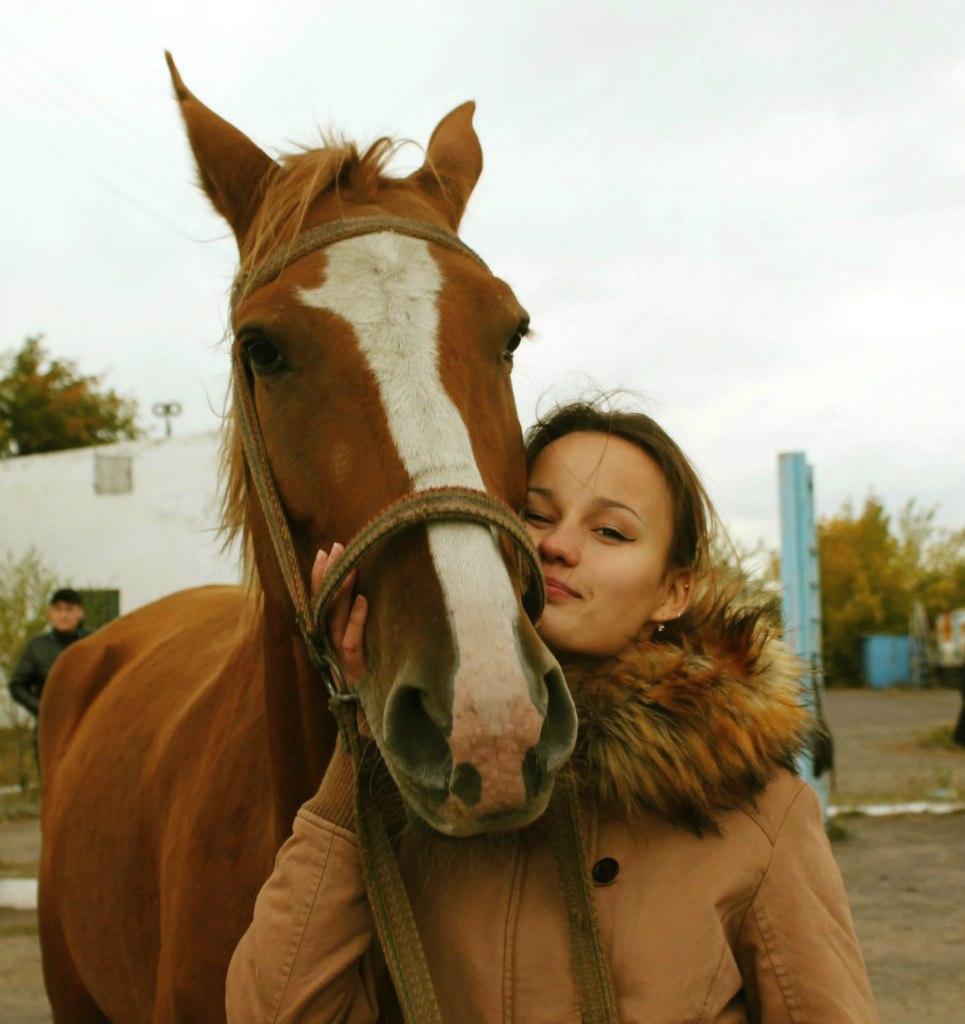 Communication with horses is always an exchange of energy, they feel when you are sad, and conversely, when you are in a good mood. Horses are smart animals. Equestrian sport builds character, helps to be strong and fearless.

To work with horses, a person must be calm, balanced, have a good heart and be patient. Patience is very important, especially if the horse is timid. They're not stupid, they learn fast, but even that takes patience. Still, need to be physically strong to be able to keep the horse if she suddenly decided to play with you.

The riding school, where I do, supports the Kazakh national horse-riding sports such as kyz kuu, baiga and kokpar.

When my mother sees my pictures from performances on a horse, she calls me "the daughter of steppes". I have it in my blood, I love the Kazakh steppes and ride horses. I am a Kazakh, and I think I should be engaged in a national sport. For myself, I chose kyz kuu and even became a candidate for the master of sports. 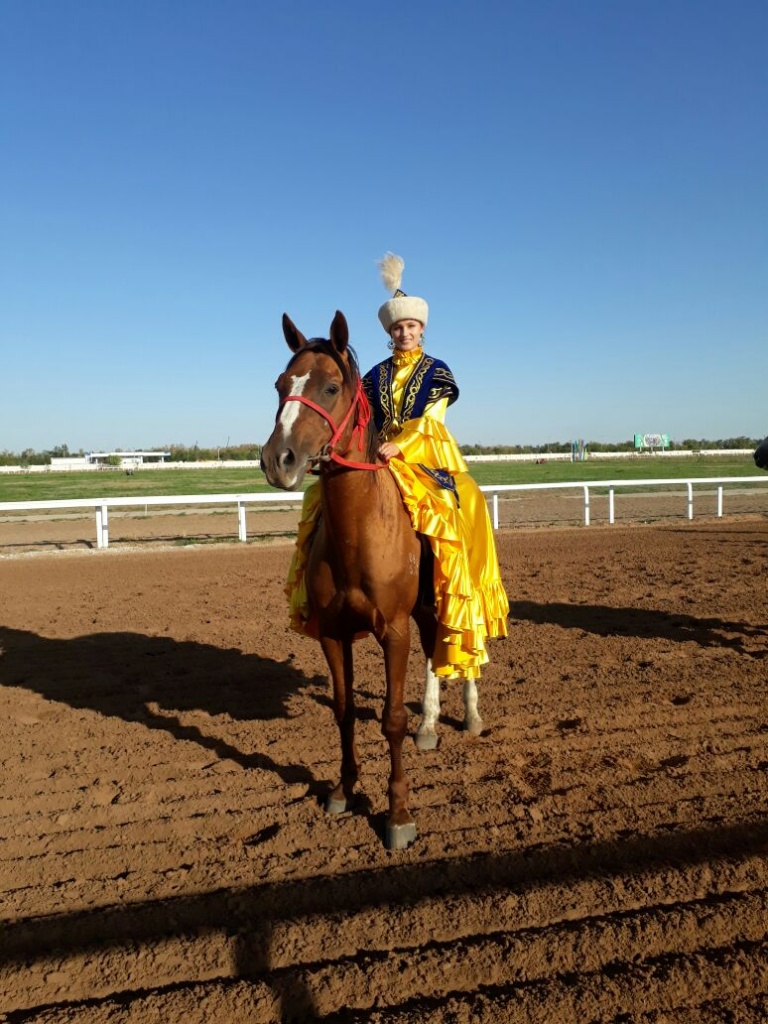 Kyz kuu is when the guy catches the girl, and then conversely. The girl has to run away, and the guy to catch up and kiss her. As it is traumatic, in spectacular performances made so that the guy instead of a kiss tears off from the girl a kerchief on a shoulder. At a distance, to the opposite direction, the girl catches up with the guy and has to hit him with a whip.

In kokpar involves two teams. At the center of the field is put the carcass of a RAM, and each team must throw a RAM into the opponent's goal. Girls doesn't play this game.

Recently, a new sport called "Jamba-aty" has appeared. It's archery on horseback. Participate and girls, and guys.

When my mother sees my pictures from performances on a horse, she calls me "the daughter of steppes"

There is also such a sport as tenge alu. Along the course are placed the bags of tenge, and a horseman at full gallop have to lift and toss them. If raised and planted this is considered for the flip, if simply were displaced by, you fly by. The winner is the one who will raise more.

And Audaryspak, this is when you need to push the opponent out of the circle and shoot from a horse. In Aldersbach are two horse guys of different weight classes that pull each other for the belt.

I came to Pavlodar to study at the University. The same specialty is also in Astana, but I decided that I want to live in Pavlodar, especially since I have been called here for a long time. I graduated in the second year, and I had the opportunity to may to go on academic mobility to practice in Germany. I also work with horses in Germany. We choose the food base for the horses and look after them.

Pavlodar is a beautiful, small and clean town. The main thing is that Pavlodar has a racetrack-it attracted me.

I see new technologies being in Germany that I would like to bring to Kazakhstan and use at home.

When I took courses in hippotherapy, I wanted to help children. I understand horses, and in addition understand these kids, who through interaction with horses are healthier.

Read this article
7 ski resorts and bases in Kyrgyzstan