A fire cub and metal yurts: 6 artists from the UK, France and Japan about their masterpieces at Art Fest Astana-2017

A fire cub and metal yurts: 6 artists from the UK, France and Japan about their masterpieces at Art Fest Astana-2017 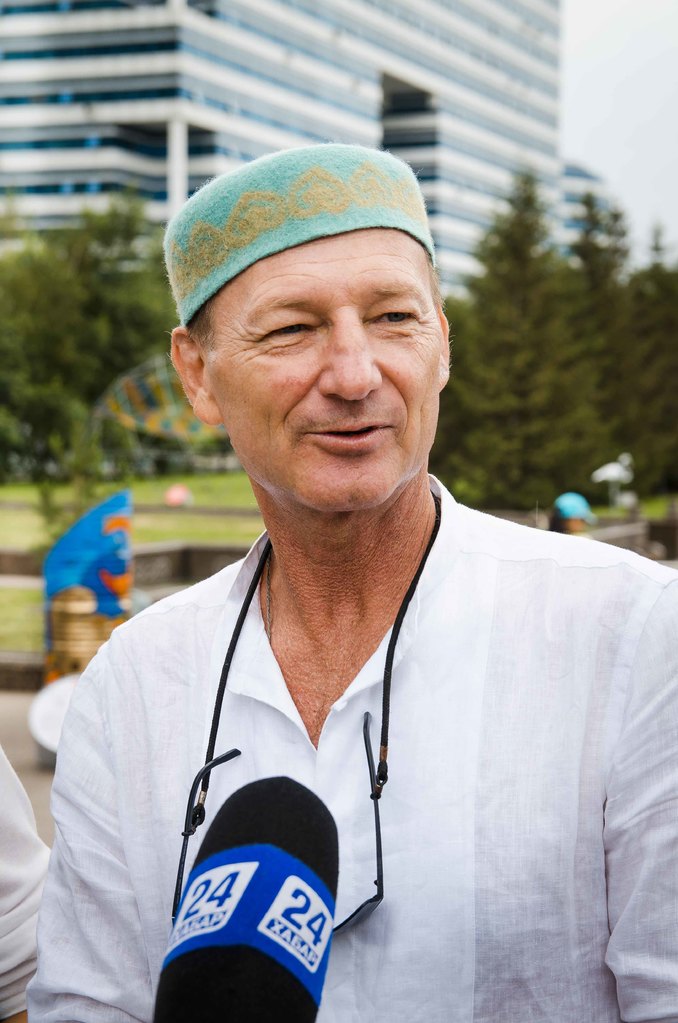 The idea to craft the sculpture occurred to me about three years ago, when I got interested in Nomads. The composition combines ancient Kazakh symbols and reflects the main nomadic culture concept. Each facet of the installation represents various aspects, stages of life. Simultaneously it is a kind of provocation, as all the stages are assembled in the cube. Setting the cube on fire symbolizes our actions to be imperfect and temporary. Fire has always been an important element for nomads. Here there are petroglyphs, ancient fire and the Tengri symbols. I’ve been making this sculpture for months by reading books, investigating ancient symbols that were found in caves. 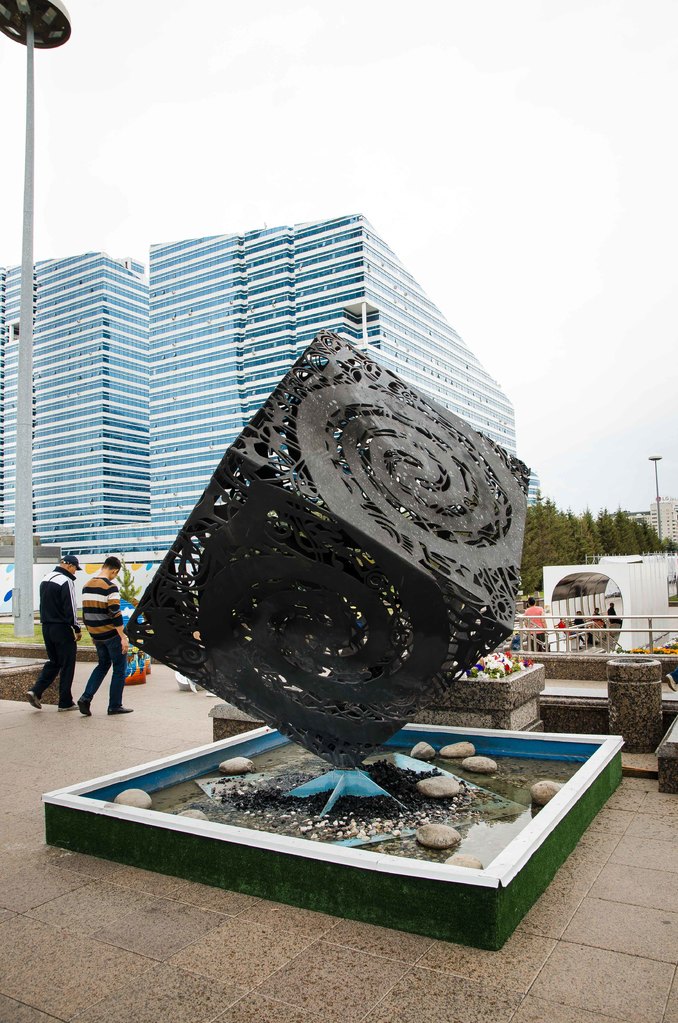 The cube is steel, the facets were cut with a laser and were combined into a cube. There is a tree set on fire inside. I drew the work sketch at the Virgin Islands by hand and sent it to Kazakhstan. This sculpture was assembled here. It was a good example of an artist and experts cooperation. 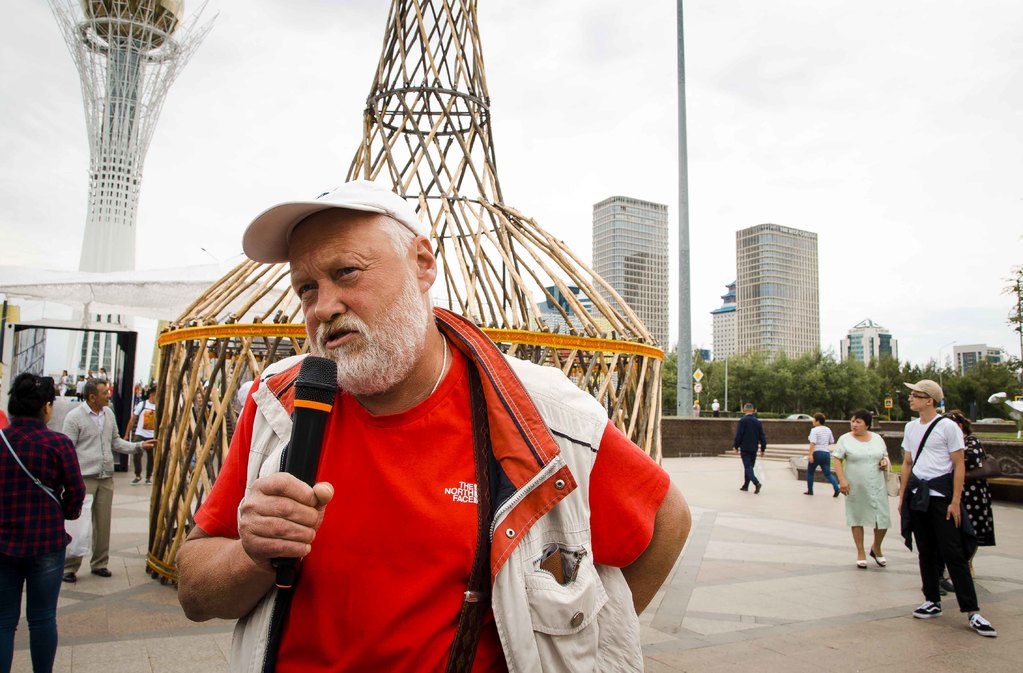 Today most designers create masterpieces of plastic and metal, whereas I made my yurt of natural materials. The installation states the necessity to communicate with the whole world. 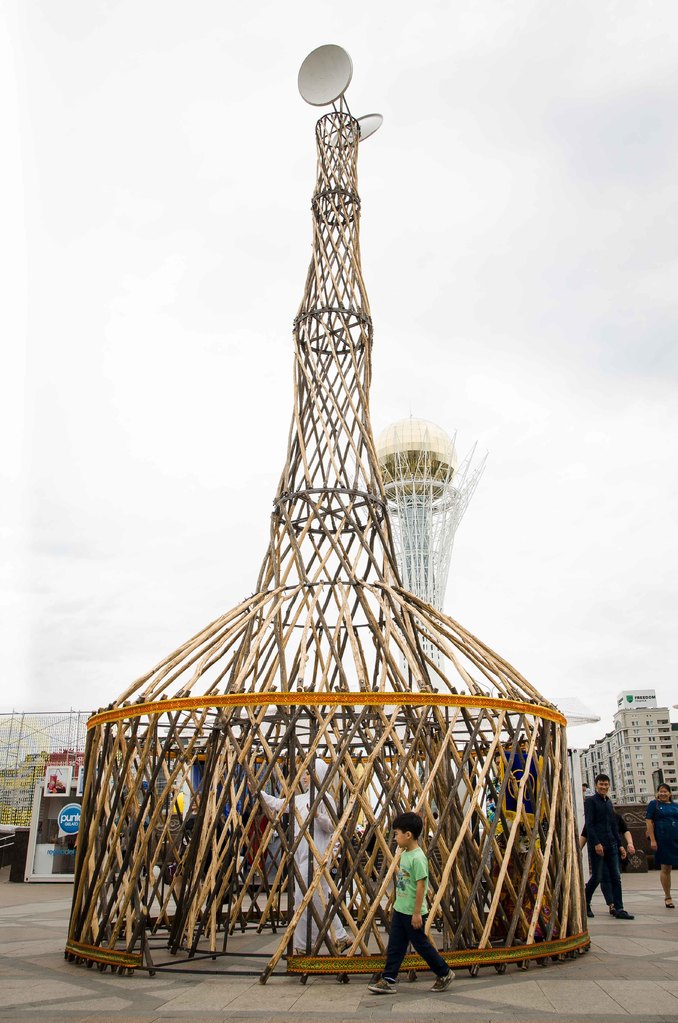 National ideas cannot be ignored as they are the core that interests people all over the world. Authenticity and indigeneity should be presented and modernized with no loss of anything essential. 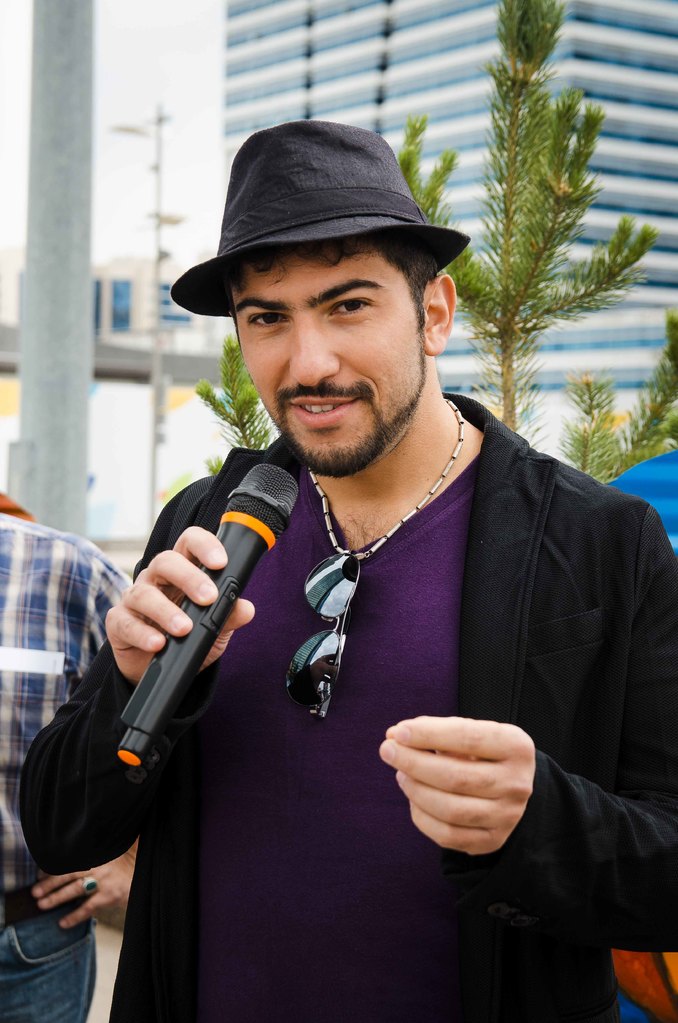 We are not allowed or not able to plant trees in many places, so we decided to place barrels with trees.

Our work’s prototype is a new symbol of Baku. The old city and the Maiden's Tower used to be symbols of Baku, while skyscrapers looking like flame lights are the new ones. Our installation has a resemblance with them. 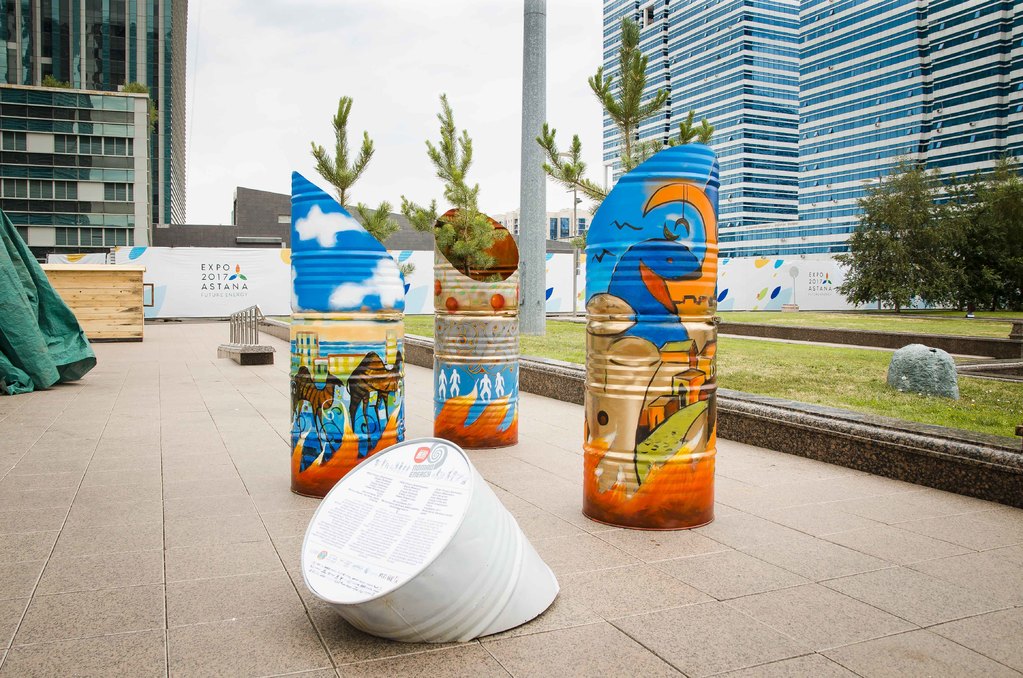 We did not bring any component here. We were given barrels in Kazakhstan, assembled and shaped them unusually here. Trees were also provided by the organizers. As for the form, it symbolizes Azerbaijan. We expect that people will cherish the ecology, take care of it. 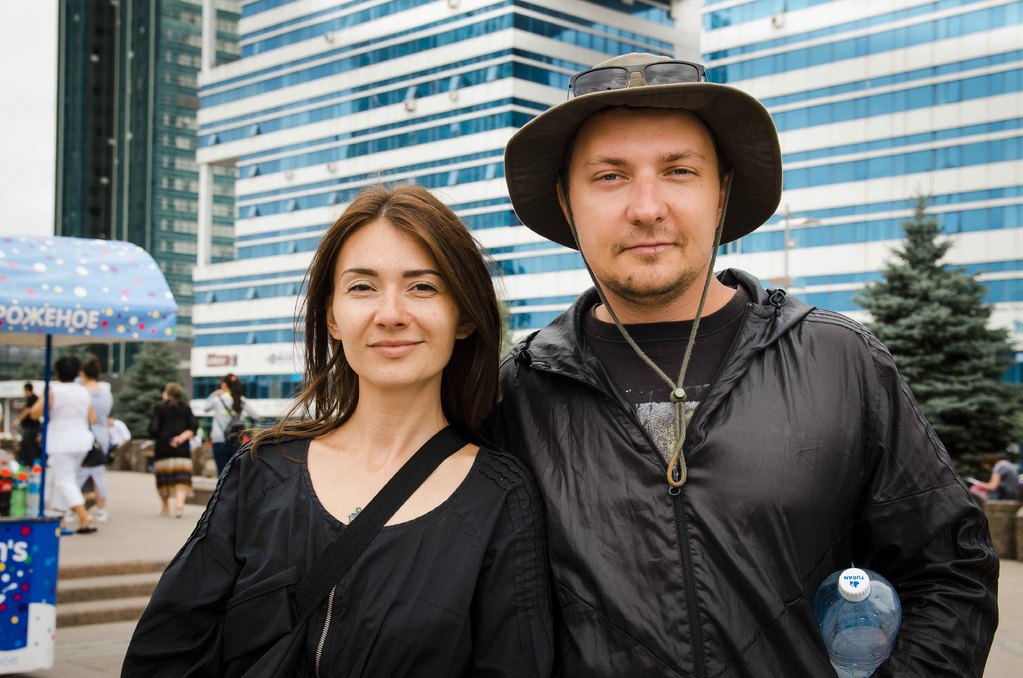 The key idea of the installation is a neo nomad, who tips his hat to past, to traditions. On the other hand, he’s facing the future and focuses on modern technologies. 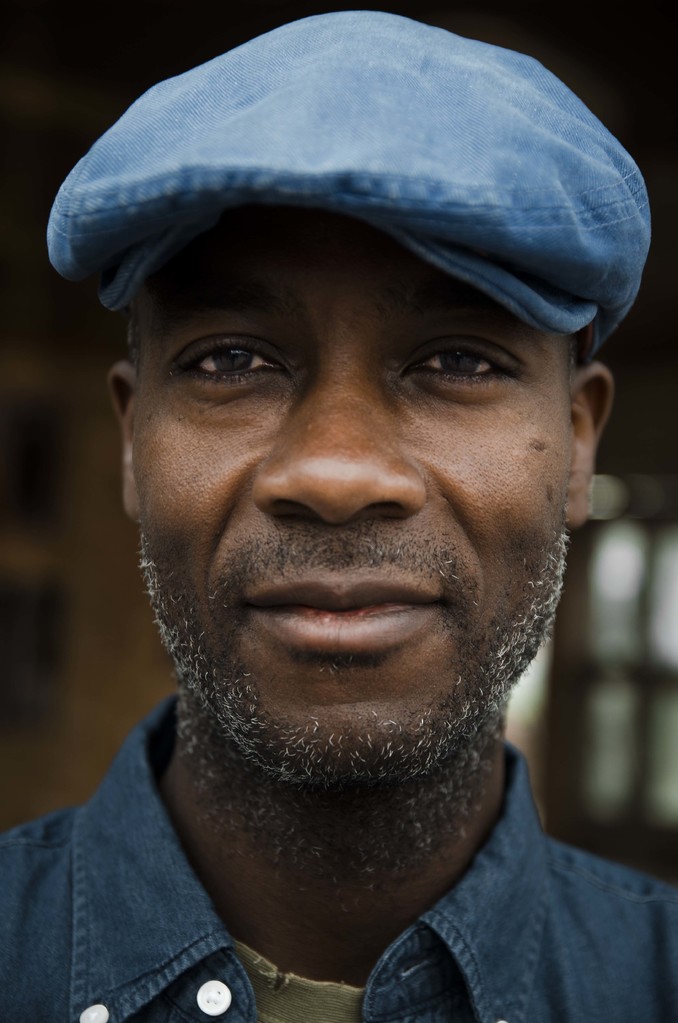 "Immigration with no borders" installation

I took part in the emigrant path that was going across Europe. I saw that Europeans try to isolate from emigrants. They closed their houses and windows. I took photos and decided to tell you about it, since your history dealt with refugees who were warmly welcomed here during the World War II. 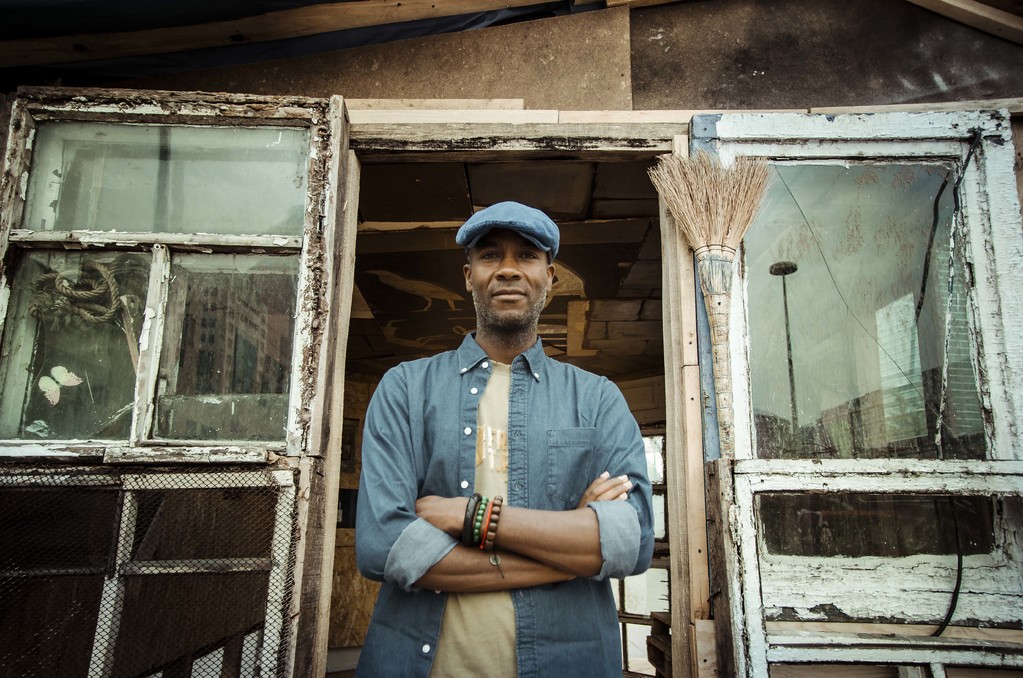 My work’s idea leans on Kazakhstan's openness to others, its readiness to accept any person in the family. Modern Europe does not accept strangers, it is closed from them. I built a hut for emigrants made from improvised means. Refugees have to live in such conditions nowadays. 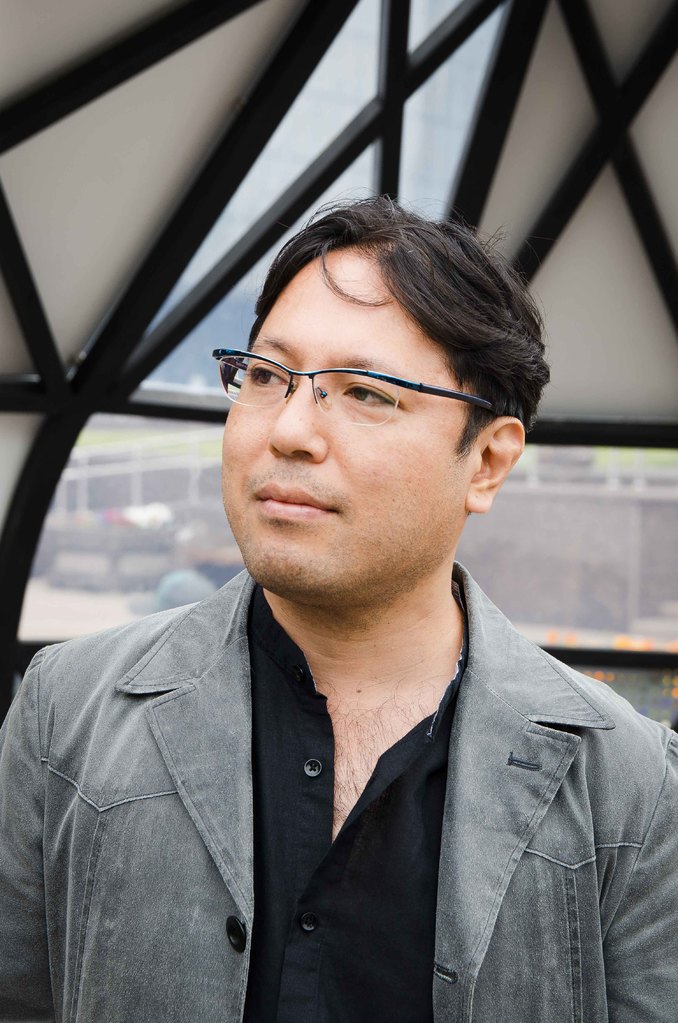 I tried to split the yurt into details and make up a new thing from the components. It’s a bus stop model for a Kazakhstan city, which is to be eight meters in length. Since the yurt is a traditional nomad dwelling, the work is portable. I was reflexing on the ways to make this simple construction more complicated. 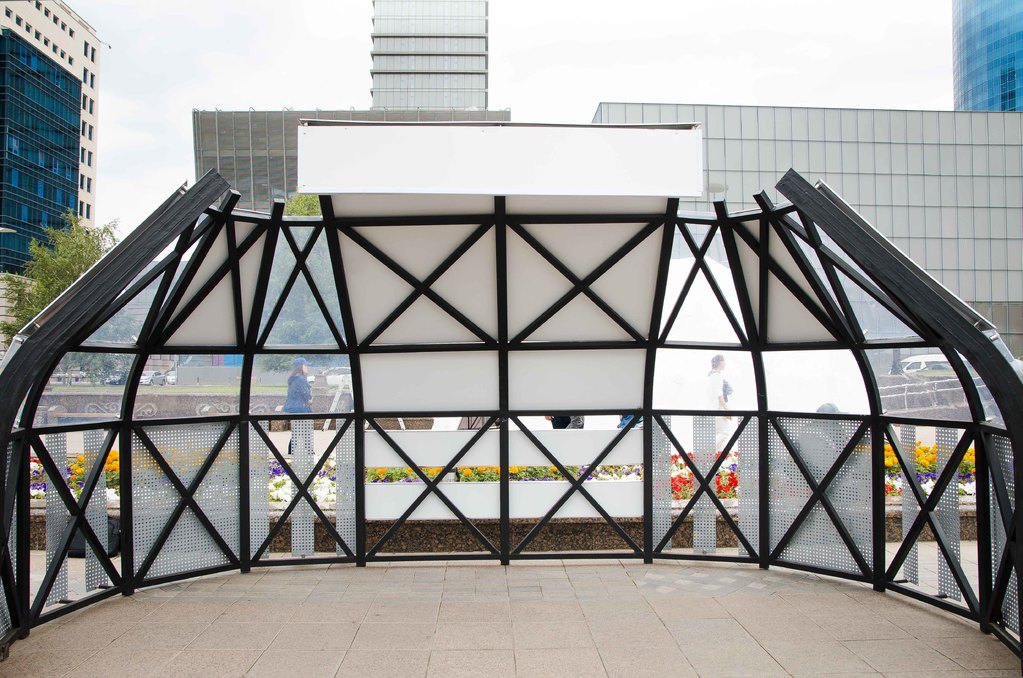 Read this article
What to watch with family: 10 cartoons everyone will like