A creative class of Astana: a Musician, a luxury clothing Buyer and a Streetwear brand Cofounder on their lives

A creative class of Astana: a Musician, a luxury clothing Buyer and a Streetwear brand Cofounder on their lives

I play the guitar, sing and write songs. Now I study music in St. Petersburg. Performing in restaurants and bars, I focus on covers and popular songs liked by the audience. I interpret them and play. Besides, we have an author's projects of electronic and acoustic music.

I was strongly influenced by Radiohead, I'm guided by both their sound and mood. When we had a rock band at school, we loved replaying the Red Hot Chili Peppers, the classic of old rock, even Black Sabbath. 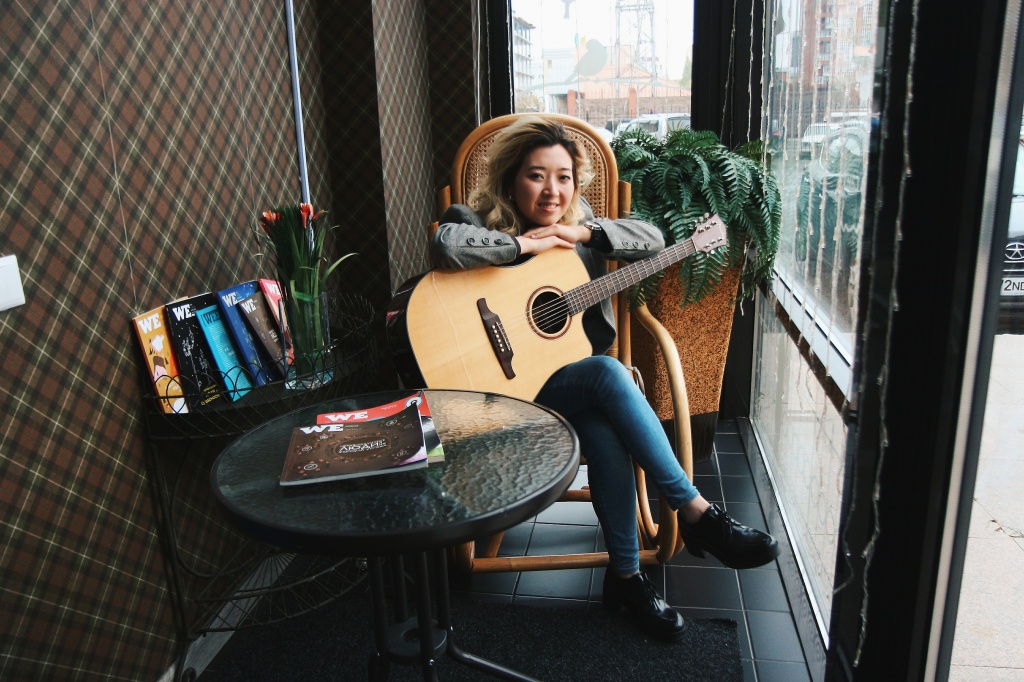 I like what the English do. Mostly they move pop culture. I like a popular band London Grammar, like the creativity of alt-J, FKA twigs, I think that they combine unusual styles and sounds, that makes them special. I was at the White Lies concert in St. Petersburg, they have a great sound, but their performance did not impress me. In general I liked it.

As for the movies, I watch a lot of films, but there are a few stuck in my mind. "Mr. Nobody" starring Jared Leto, and "Green Mile" starring Tom Hanks blew my mind, changed me in some way.

As for reading, I read a lot being a pupil and a student. My favorite writer is Bernard Shaw. At the moment, I'm more selective in reading. If I don’t like the first two or three pages, I will not finish reading it.

I don’t have favorite brands. It must be comfortable and fit you. I used to wear a lot of rings, but I refused them. I became picky, it’s inconvenient to play the guitar with rings on my fingers. As for accessories, I like watch, which I constantly wear. It’s my must-have, I feel weird not wearing them.

Sleeping helps me a lot. I work in bars at night, and, accordingly, my schedule is violated and to recover and be fresh at night, it is necessary to have a nap in the afternoon. For creative people the night is the most fruitful time for composing or working at the studio.

Generally I like to spend time with friends. We like to meet and jam in Rixos, Irish Pub. There we listen to each other, we improvise, talk.

I love the National Museum in Astana, it’s a good place to look for new ideas and to escape from the routine. I prefer places like galleries, places with good live music.

I am inspired by Hemingway, being a journalist and writer, he lived an interesting life. His life can be traced in his work. The most famous story "The Old Man and the Sea," has moments that cannot be read without tears. The idea of ​​a strong spirit is cultivated there and it inspired me for a long. I’m inspired by my parents. It may sound trivial, yet the upbringing and outlook of parents greatly influences our lives. Mom always says: "Be better than me."

I want to finish preparing records, release a small album, to shoot an MV. These are the standard aims for any musician. In general, people are always on the lookout just trying to feel self-sufficient. You can show up in creativity or in any other sphere, constantly balancing, enjoying the moment.

For a long time I listened to heavy music, rock, metal. At the moment I listen to whatever I like. Probably I’ve just grown up. Today I can listen to the music liked by my grandma, old Kazakh songs, for example.

I don’t like watching movies. It's too much for me to sit and watch a movie, for this I need to be very interested. But in general, I like motivating films like the one about Steve Jobs, "Social Network", a film about McDonald's formation. I prefer realistic, biographical, documentary films. 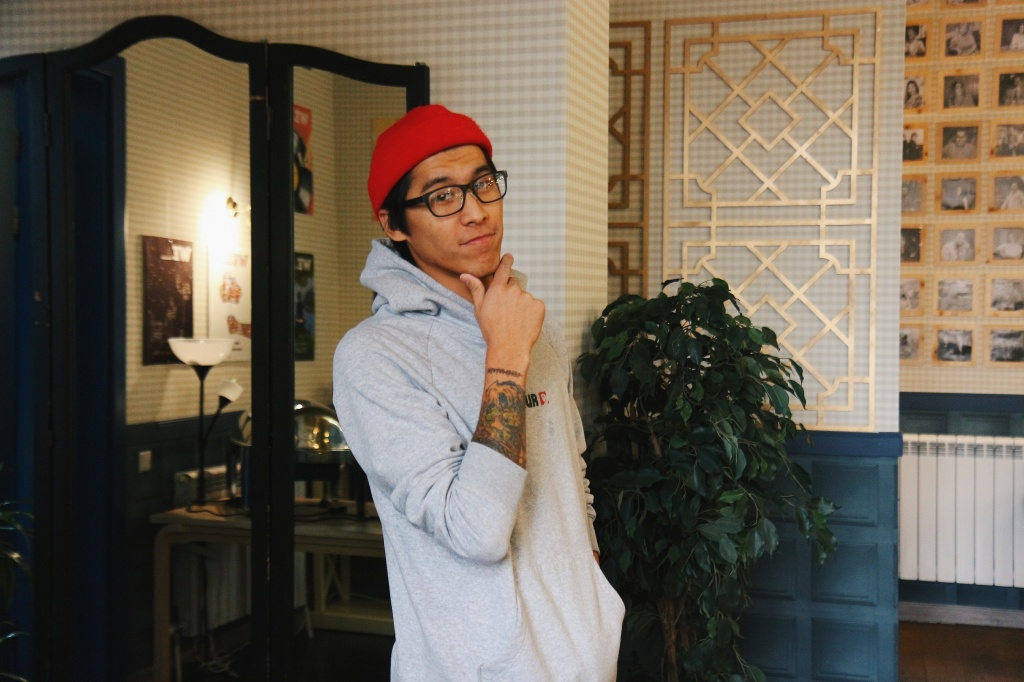 It’s difficult for me to force to get interested in a book. If a storyline doesn’t interest me at the beginning, I put the book away. Haven’t read much, though prefer adventurous, biographical, science fiction books. I like stories about people and their formation as individuals.

Now I try to wear only those done with my friend, i.e. BAIKONUR brand. I'm an adherent of brand shoes. I do not allow myself to buy replicas and copies. I go to the official stores or order. I adore shoes and I have no idea how people wear Chinese shoes that completely ruin a brand impression and make your feet feel uncomfortable. The label is not important. I wear either one-color clothing or the one made by myself. As for accessories, I wear a watch. I want to buy Apple Watch, since they are convenient to use.

I like to rest with my parents, my family. If I have the opportunity to visit any country, I visit it from the point of its history, culture, architecture.

I like O'Hara Pub in Astana. I hang there out with my friends, the music’s good and people are of my age.

It is difficult to have a favorite place in Kazakhstan, as they are unstable. For example, somewhere in Italy there is a cool pizzeria, which is already 100 years old. Everyone goes there, because the chef works there for long and makes a delicious pizza. As for Kazakhstan, the market is growing and people are trying to earn more. Therefore, establishments sometimes lose any taste.

I may sound trivial, but I like Steve Jobs, Mark Zuckerberg and Conor McGregor. I’d known about McGregor even before he became popular, I remember his first fights. He's a daring and a simple guy. I like that he achieves something, even not having a special talent.

As for the rock culture, I like Oliver Sykes - the vocalist of Bring Me The Horizon. Thanks to him I had an idea to create clothes, but not as a fashion designer, but simply to make comfortable clothes that I and people would wear. It’s not about expensive branded clothing, but comfortable and warm.

My goal at the moment is to create a product that will leave long after I pass away. I want my product to be associated not only with me, but also with the whole country. We do not want to enter the superior fashion world, we want to be known and let people wear our clothes. As for Burger Street, I want it to develop further and became a part of someone's tradition. My aim is to leave behind a track and rejoice that your business lives on and succeeds. 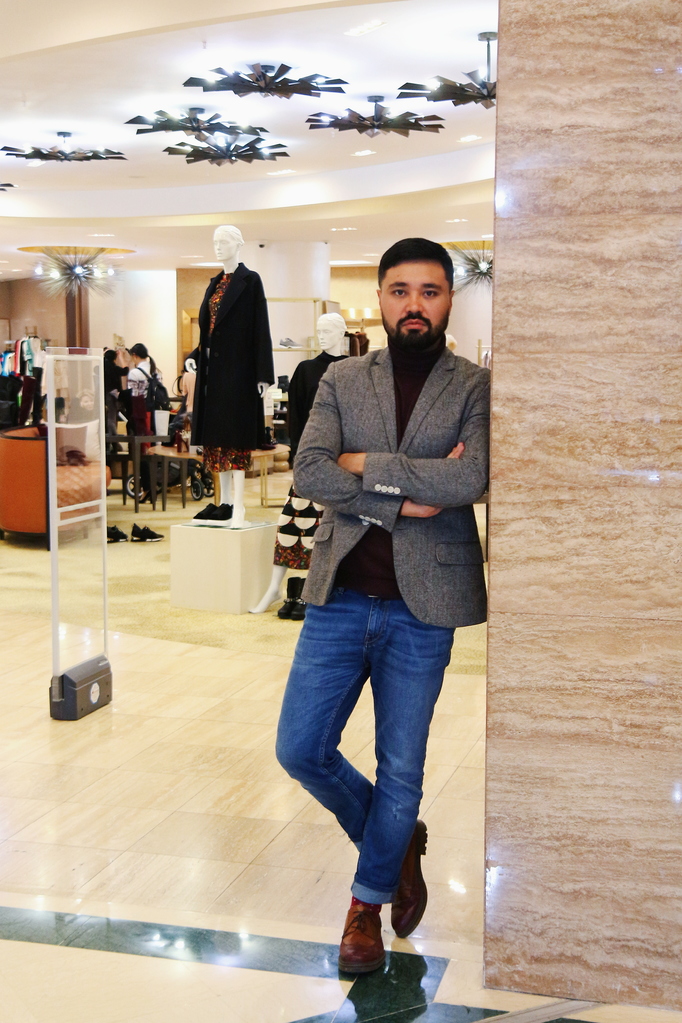 Literature is divided into two categories. The first stands for popular literature, such as “Shantaram”. The second is about the works we had to read at school, though didn’t. Now I'm reading “War and Peace”. Tried to read “Oblomov”, although it was a bit boring. "Oblomov" for me is the personification of 70-80% of Astana population, total fiasco (“oblom” is for English “fiasco”). This is my personal opinion, a kind of a modern interpretation.

In fact, I have no preferences for a certain category of goods - luxury or mass-market. If I like a thing, I buy it. Mostly I buy clothes in the mass market. Fashion is cyclical, and I don’t want to regret throwing something out. I try to shop in Europe, it's either Zara, Top Man, H & M, Reebok or some local European inexpensive brands. Shoes are preferred to be branded and expensive, at the same time those that no one in Astana would choose, since it is too elaborate for them. I choose the ones not for mass consumption. Sometimes I go to luxury stores while they have discounts and choose the shoes having a full sizes range, which means that no one understands such shoes. I prefer things that has never been bought.

I'm not keen on silver rings. I buy them in European cities, in tents, where all sorts of magnets, necklaces, chains are sold. In Milan I have a seller who always stands in the same place in the same street. Every year when I come to Milan, I buy myself a ring for the finger that I have not bought yet. That has been my tradition for five years.

I like to invite friends home and cook one of my own specialties. Recently I had a borsch-party, because I know that my friends love my borsch or dream of trying it. I prepared a large borsch pan and in two hours I saw that the pan was empty and hadn’t even tried it.

The people I'm inspired by are designers. If I’m feeling free, I watch oversize-designers, like Yoshi Yamamoto. If I’m feeling a bit aggressive, then I'll watch Alexander McQueen and get inspiration from him. If I want to have a look at charm and style, then it will be Ami Baris. I try to be inspired by those who used to be popular, but now they are all forgotten, or by those that are unpopular in Kazakhstan and CIS countries, but are popular in Europe or America.

I want to find a place where I would feel comfortable.

10660
HOW TO PLAY IN POPULAR FILMS WITHOUT ACTING DEGREE